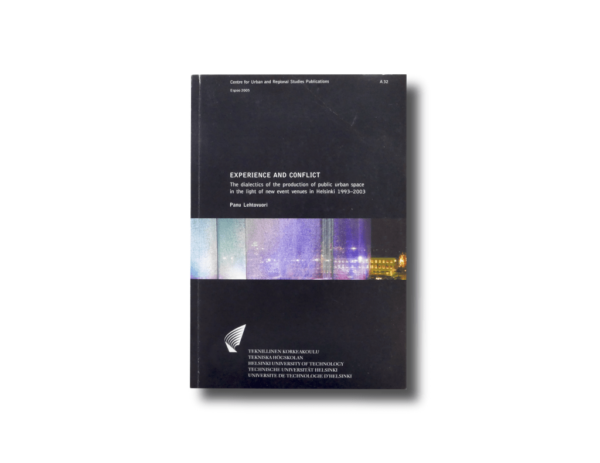 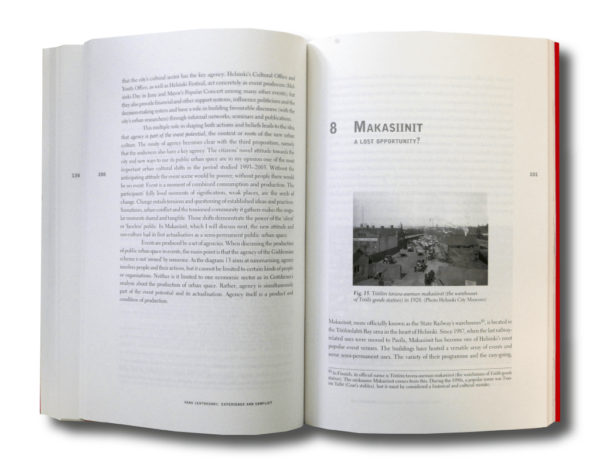 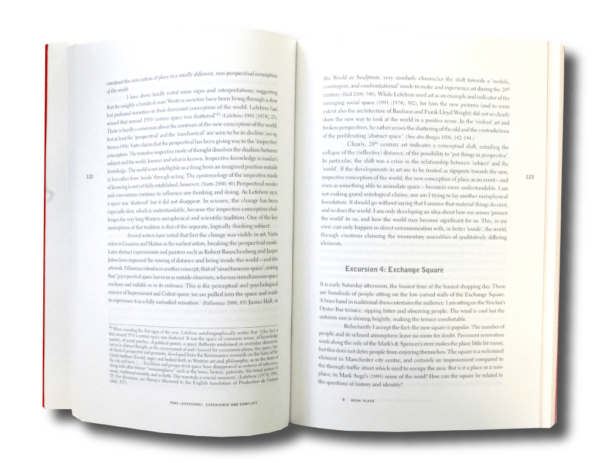 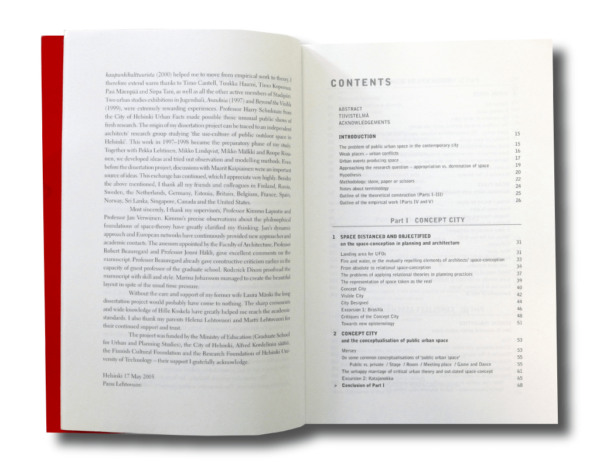 Panu Lehtovuori’s doctoral thesis Experience and Conflict (Helsinki University of Technology, 2005) is a study of the dialectics of the production of public urban space in the light of new event venues in Helsinki 1993–2003.

The copy in stock is in reasonable condition. The covers show some wear, but the pages are clean and tidy, except for the previous owner’s stamp on the front flyleaf.

Panu Lehtovuori’s doctoral thesis Experience and Conflict is a study of the dialectics of the production of public urban space in the light of new event venues in Helsinki 1993–2003. Lehtovuori defended his academic dissertation at the Helsinki University of Technology (currently Aalto University) in 2005.

According to the abstract, the aim of this thesis is to formulate a new, richer theory about space in general and public urban space in particular. The new theory includes physical space, its use and, as the most difficult aspect, the personal, singular moments of invention and existentially important experiences that are indispensable elements of the lived urban space.

Instead of visual and practico-material, space is understood as socially produced. The central new notions the work develops, include 1) ‘weak place’, a new conceptualisation of place as the individual and singular moment of signification; 2) ‘spatial dialectics 2.0’, a development of Henri Lefebvre’s dialectique de triplicité; and 3) ‘quasi-object’, leading to a new interpretation of the role of material artefacts and spatial configurations in the production of space. The work contextualises Lefebvre’s ideas to urban planning and architecture. It aims at reconceptualising the notions of space and place in those fields in such a way that the conflictual coming-together of individual experiences, spatial practices and public perceptions can be understood as the constituent process of public urban space.

Though the thesis is primarily a theoretical treatise, it is grounded on empirical observations in Helsinki, with references to Manchester and Berlin. Since the late 1980s, urban events have had an important role in the production of new public urban spaces in Helsinki. In events, citizens have claimed urban space, producing new meanings and new uses. Simultaneously, processes of commercialisation and routinisation of the event scene have taken place. The material of Experience and Conflict focuses on the period, marked by two major events in Senate Square, the Total Balalaika Show (1993) and its tenth anniversary, the Global Balalaika Show. A juxtaposition of both symbolic.and configurational centrality and marginality is found to characterise the most successful event venues. Töölönlahti Bay area is emblematic in this respect. The struggle to save the old railway warehouses Makasiinit for event uses and its repercussions on the public imagination about desirable city life are seen as the culmination of the urban cultural change of that decade. Makasiinit also provides an important theoretical lesson, because there the material shell of the buildings momentarily acted as the ‘Other’ of the spatial dialectics, thus dynamising the socio-material situation.

Finally, the influences of the new theory in planning and design methods are discussed through the author’s own projects. New approaches and tools leading to ‘experiential urbanism’ are suggested and developed.

— Panu Lehtovuori, Experience and conflict: The dialectics of the production of public urban space in the light of new event venues in Helsinki 1993–2003, Abstract (excerpt)

The copy in stock is in reasonable condition. The covers show some wear, but the pages are clean and tidy, except for the previous owner’s stamp on the front flyleaf.