Prostor vremena – A collection of Juhani Pallasmaa’s essays in Serbian 17.02.2018

As a Finn and an architect trained in Finland, I have found it quite hard to get my head around the vast international popularity of Juhani Pallasmaa. For me, and for many of my Finnish colleagues, Juhani Pallasmaa is the nice, friendly figure who still occasionally attends our seminars at the university in Otaniemi and who gives these gigantic lectures packed with knowledge about the art of architecture, the visual arts, cinema and philosophy. A good reminder of Juhani Pallasmaa’s renowned position in the international scene came a few weeks before Christmas when I was notified about a new book, Prostor vremena – Izabrani eseji Juhani Pallasmaa. Prostor vremena – The Space of Time in English – is the first Serbian translation of selected Juhani Pallasmaa’s essays.

I had a chance to meet Ajla Selenić, a Serbian architect and the co-editor in charge of selecting the translated essays for the new book, at the Akateeminen bookstore for a cup of coffee. Here is how Ajla sees the relevance of Juhani Pallasmaa in the Serbian context.

How did you come across with Juhani Pallasmaa and his architectural thinking in the first place?
— Becoming acquainted with the Finnish architectural scene in the beginning of nineties, after coming to Helsinki as a young architect profoundly devoted to architecture, creative work and philosophical thought, I immediately distinguished the architectural works of Juhani Pallasmaa and recognized the sophistication and sensibility of his designs. Reading some of his essays published at that time particularly strengthened my respect and affinity for his contemplative, poetical way of understanding architecture. Between the lines of those texts, the most decisive impact came nevertheless with finding one name that was truly important to me − Andrei Tarkovsky, one of the greatest artists of the 20th century, whose profoundness in the human inner search for immaterial values was a timeless message to humanity, something especially worth remembering today. Among other intellectual interconnections, there was a mutual affinity for the poetic sensibility of Gaston Bachelard, an invaluable source of inspiration for me since the beginning of my architecture studies, but also it was the intense encounter with existential philosophy, phenomenology and certainly the overwhelming devotion to literature, poetry and art that evoked my lasting appreciation.

Since 1994, when I first met him, I have been privileged to have intermittently many insightful conversations with him on the essential questions of architecture and related meaningful subjects, to share with him some thoughts and intellectual concerns, as well as hear his invaluable opinions and reflections. However, it was only later that I obtained a more encompassing overview of Juhani Pallasmaa’s complete writings, particularly after becoming acquainted with the excellent collection of his essays Encounters, edited by Peter MacKeith.

What made you choose these particular essays by Juhani Pallasmaa to be translated into Serbian for publication as a book?
— Juhani Pallasmaa’s phenomenological perception of architecture as an existential space fused with the experiential, mental and emotional complexity of human being, has been in great consonance with my own understanding of architectural space and the awareness of its profound ontological interconnectedness with our inner world and the sense of existential meaning. However, to select only ten essays from among many of the most inspiring and meaningful subjects on the phenomenology of architecture, the perception of space and time, consciousness and creative processes, intertwined with many other fields of creative work such as literature, poetry, philosophy, art or the discoveries of scientific research, was an honourable, yet certainly also, a challenging task.

Based on my profound interest in philosophy, metaphysical questions and an ontological research of space, time and human inner consciousness, my selection was focused primarily on themes transcending towards the sphere of immaterial experiential qualities, highlighted in the essays On Atmosphere, In Praise of Vagueness, and The Aura of the Sacred.

the significance of reassessing our perception of time, and expanding our awareness of its inherent complexity and its unfathomable dynamic and multilayeredness

Beginning with Space, Place, Memory and Imagination, this selection of essays opens a perspective on the complex interdependencies between space and time within the experiential reality of human perception and consciousness. The chosen title of the book, taken from the name of the concluding essay in the selection, The Space of Time, highlights the main thematic span of the book and the significance of reassessing our perception of time, and expanding our awareness of its inherent complexity and its unfathomable dynamic and multilayeredness. A more profound perception of time, beyond its common understanding as mere linear chronology and beyond the imposed experiential compression of contemporaneity, enables us to discern the multi-dimensional nature of existential consciousness and creative work as well in architecture, within the space that we are inhabiting, experiencing and creating.

How would you describe the architectural climate in Serbia at the present moment?
— The Serbian intellectual scene has traditionally been involved in an intense and complex philosophical discourse, following with great attention the arts, philosophy, literature and culture, and hosting many of the world’s prominent cultural and intellectual figures. Irrespective of the very difficult situation in the country during the last two decades, the architectural scene has nevertheless been very dynamic and open. Numerous architectural events, lectures, conferences and exhibitions have been held in Belgrade and were well attended. One of the most important events is the annual architectural exhibition, Salon of Architecture Belgrade, which for already many decades has continuously presenting the newest architectural works in Serbia and the surrounding region. Another significant influence in the architectural scene in Belgrade and the entire region is BINA / Belgrade International Architecture Week, which offers an eventful, vibrant and extensive programme of the most recent international architectural projects, exhibitions, workshops and lectures.

The publisher of this book – The Faculty of Architecture at the University of Belgrade – recently celebrated the 170th anniversary of architectural education in Serbia, has been hosting many distinguished international architects and lecturers. Apart from the significant publishing activity on architectural theory and research, the Faculty of Architecture in Belgrade have close l academic and professional connections with many  universities and renowned architects around the world, and my initiative to publish Juhani Pallasmaa’s essays in Serbian was accepted with sincere appreciation by the dean of the Faculty of Architecture, Dr Vladan Djokić, who is the co-editor of the book, Professor Emeritus Branislav Mitrović and Professor Zoran Lazović, who both reviewed the book, and many other colleagues and students.

His phenomenological perspective on the essence of architecture extends far beyond the perception of architectural spaces as mere functional, utilitarian constructions and its images, but rather as authentic experiences of complex spatial sensations fused with the immense sensitivity that is inhabiting a human being. In his critical attitude towards the perception of architecture predominantly in regard to its visual, functional or material aspects, Juhani Pallasmaa emphasizes the importance of the more complex understanding of architectural space as a mental connectedness between the world and our inner self, experienced by all the senses and the consciousness of a sensitive, thoughtful, emotional and empathetic human being.

Among many meaningful messages in Juhani Pallasmaa’s essays, one that I would emphasize is how he reminds us of the importance of defending and preserving the authenticity of human experience. Rather than glorifying overambitious technological achievements, characterized predominantly by alienated spaces, evaluating architecture by means of the most sensitive aspects of human life enables us to both create and preserve an authentic human environment as a setting for a dignified life based on an existential connection between space and human consciousness, on a sense of proportion between a constructed and an authentic life, between the material and immaterial, and between the demands of contemporaneity and the wisdom of timelessness.

Ajla Selenić is a distinguished Serbian architect (M. Arch 1986, Faculty of Architecture, Belgrade University). Since 1990 she has lived and worked in Finland on many diverse architectural, design and art projects, which have received awards, and have been exhibited and published internationally. Selenić is continuously exploring the meaning of creative work, abstract form, space and time in an ontological and transcendental sense. You can read more about Ajla on her online cv at architectuul.com/architect/ajla-selenic. 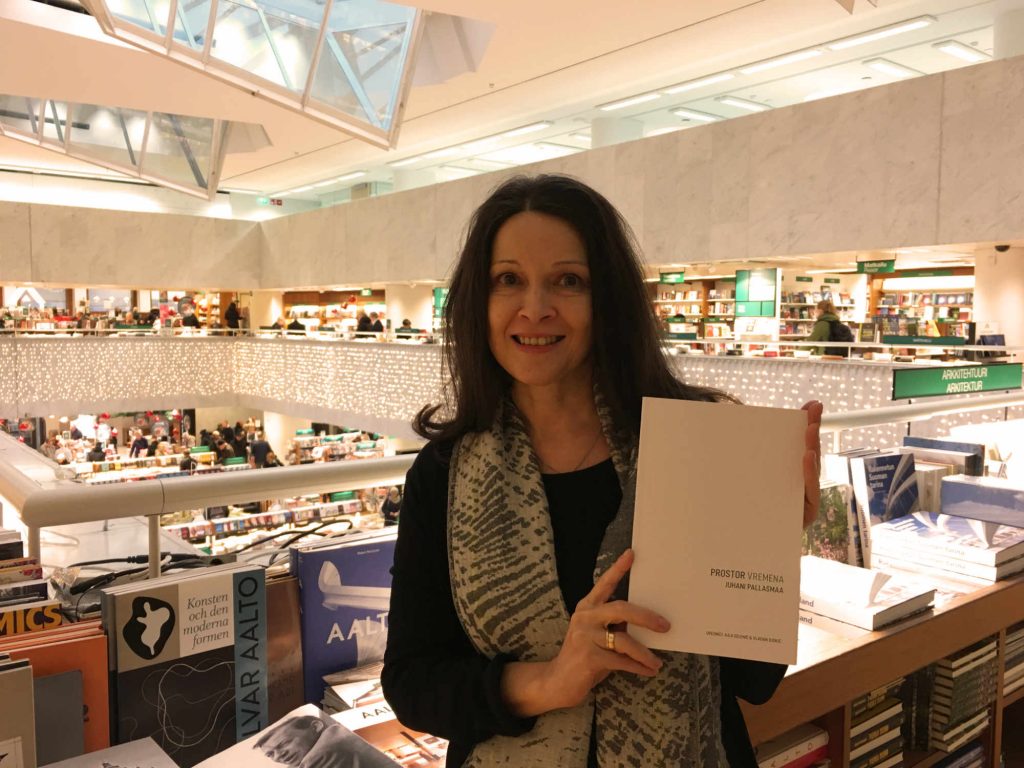